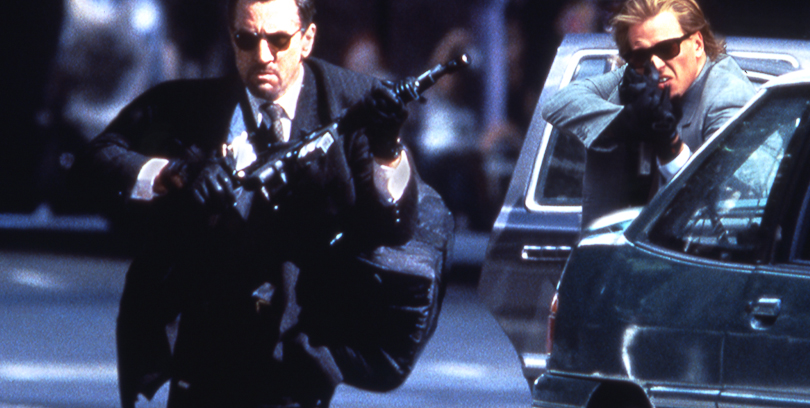 Returning in a new 35mm print to mark its twentieth anniversary, Heat was the culmination of nearly two decades worth of thought, research, and refinement by writer-director Michael Mann.

Basing his story on a real-life incident related to him by his friend, former Chicago police detective Chuck Adamson, Mann first brought the project to the small screen as the TV movie L.A. Takedown before revamping and expanding it for theatres.

Hard-boiled ex-con Neil McCauley (Robert De Niro) is the leader of a crew of seasoned stickup artists who operate with grim determination and military discipline. When a last-minute replacement on his team leads to a bloody triple murder during an armoured truck robbery, McCauley is targeted by veteran detective Vincent Hanna (Al Pacino), whose fanatic dedication both mirrors and contrasts with McCauley's ruthless professional expertise. Ready to leave the life, McCauley is looking to make one last big score and cash out; but when the score goes sour, he finds himself violating his own code of self-preservation to save what is most important to him.

Heat is most famous for marking the first onscreen pairing of De Niro and Pacino, and the coffee-shop showdown between Hanna and McCauley is not only the most eloquent encapsulation of Mann's romantic-fatalistic philosophy, but a milestone in movie masculinity: it's almost as if all the gangsters, cops, and other iconic characters that the two actors had embodied were sitting next to them in that brightly-lit diner.

A model of mainstream narrative storytelling and a masterpiece of action cinema — the epic shootout in the heart of downtown LA is one of the most remarkable set pieces in film history — Heat remains as incendiary today as it was twenty years ago.