Animated and live-action worlds intersect as a filmmaker, a comic-book artist and a novelist tell each others' stories, in this Canadian-Brazilian co-production starring Gael García Bernal, Mariana Ximenes, Alison Pill and Don McKellar. 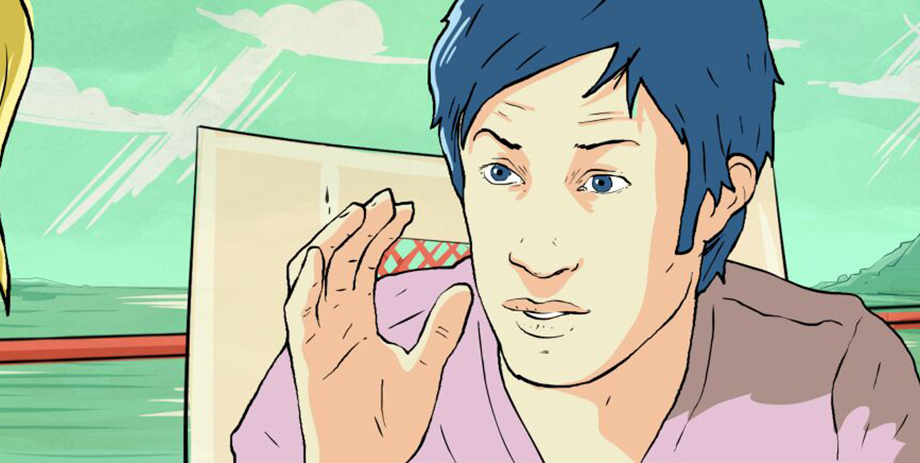 A cartoonist draws a comic book about a filmmaker, who shoots a film about a novelist, who writes a book about a cartoonist. In three interwoven stories, Zoom dives into a world of art and sex that sustains both pursuits — along with a sense of unfettered id.

Emma (Alison Pill) is a comic-book artist who works by day in a factory that makes sex dolls, which is messing with her head. In an attempt to get herself closer to the plastic fantasy image that surrounds her, she makes a rash decision. Then she decides she wants to reverse that choice, but it's too late and too expensive to turn back. Fortunately, Michelle (Mariana Ximenes), the aspiring novelist writing Emma's story, gives her a way out. In turn, Emma controls the story of Edward (Gael García Bernal, also appearing at the Festival in Desierto), the filmmaker at the centre of the comic book she's drawing. He's a successful action-movie director with no shortage of confidence and an urge to make more artistically ambitious films. But, in a cruel joke, Emma takes her pen to the root of this man's vanity, shrivelling his confidence instantly. He begins to struggle with his film about Michelle, a Brazilian model living in Toronto and trying to write a novel about a cartoonist. In a bid to escape the fashion world and immerse herself in her writing, she returns to Brazil, finding a small fishing village where the pressure to complete her novel leads her to Alice (Cláudia Ohana), a hotel owner who changes her life. Of course, the hand of Michelle's creator, the action-movie director who wants to be a serious auteur, is never far behind.