In this brilliantly executed slow-burn thriller from Romanian director Radu Muntean, a family man who witnessed the prelude to a murder determines to keep his mouth shut and mind his own business — until the possible killer turns up at his door one day and begins to ingratiate himself into the lives of his wife and son. 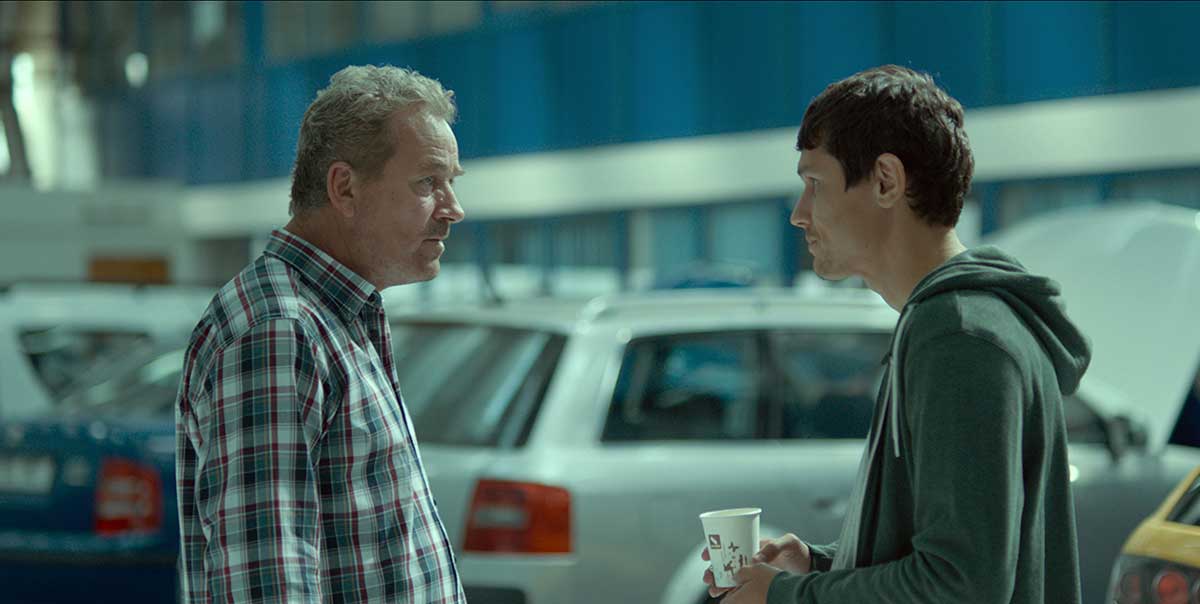 Returning home to his apartment one night, Sandu Patrascu (Teodor Corban) eavesdrops on a fierce argument between his downstairs neighbour Laura and her boyfriend Vali (Iulian Postelnicu), who catches Sandu listening in. Laura is found dead the next day, and Patrascu is sure that Vali, also a tenant in the building, is responsible. But when the police come asking questions, Sandu reveals nothing.

Hiding his suspicions from the authorities, and from his wife, Olga, and teenage son, Matei, he seems content to go about his daily business expediting car registrations and doting on his dog. But Sandu's routine is interrupted when Vali appears at his door, offering to help Matei with his Xbox — and soon Vali has ingratiated himself into the family, testing Sandu's resolve to remain silent and pushing him to the edge.

An expertly executed slow-burn thriller reminiscent of Hitchcock's Rear Window, Radu Muntean's One Floor Below resists simple characterizations and motivations in favour of complex and opaque behaviour. Why does Sandu withhold information? Who is he protecting: Vali or himself? What could he be hiding? The film asks all of these questions and more, but allows us to find the answers for ourselves.

Like many of his Romanian filmmaker contemporaries, Muntean has a penchant for the depiction of mundane bureaucracy. In One Floor Below he uses it to heighten suspense, establishing the sense that the everyday could give way to explosive violence. One can't help but see the film as a comment on post-Ceau?escu Romania, with Sandu embodying a national distrust of authority, but it also speaks to more general cultural attitudes towards privacy and social responsibility. These themes are perfectly embodied in Corban's wonderfully restrained performance as Sandu, a man whose daily deadpan façade occasionally lifts to give a brief glimpse of what simmers beneath.